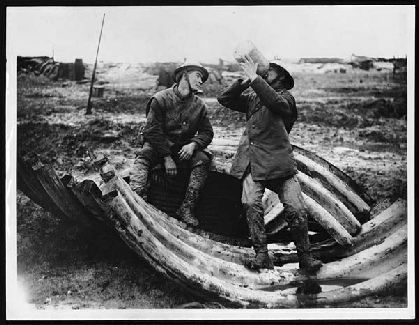 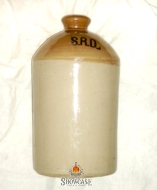 Soldiers during the First World War were always delighted when they saw this jug, even though they were unsure of the meaning of the initials on the side. The contents were definitely rum, and depending on who you talked to, the three letters stood for Special Red Demerara, Service Rum Distribution, Supply Reserve Depot or other names of the type beloved by bureaucrats. The soldiers naturally came up with their own acronyms: Seldom Reaches Destination and Soon Runs Dry were both popular. The jugs were delivered to the battlefields in the thousands and can still be found in antique shops in France and Belgium. On the right is an image of a woven basket flagon which contains a ceramic flagon similar to the SRD jars used during the Boer and First World Wars (on display at the distillery). Thanks to Richard Foss, author of "Rum: A Global History" for the image of the genuine SRD jar and information concerning the initials. http://www.rumhistory.com/

This picture of two Scottish soldiers in a bombed-out landscape probably dates from 1916, and is entitled "Sorry, it is empty."  There is a look of longing and sadness on the poor fellow on the left, watching his comrade drain the last dregs from the rum jug. Soldiers in the armies of the modern world have it much better in every other way - air-conditioned tents in desert heat, modern water-shedding clothing in damp climate, more nutritious and better-preserved food - but they are denied the official rations of liquor that comforted their grandfathers in the fields of Flanders and France. (Photo from the archive of the National Libarary of Scotland, public domain.) Thanks again to Richard Foss for image and information. 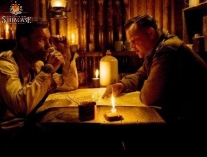 A replica S.R.D jar as seen in the background of a scene in the Australian movie, “Beneath Hill 60”.

Thanks to Graeme for sharing this information with us. It would appear the mystery of what the letters SRD officially stood for has been solved! (And the Australian War Memorial has it wrong!).

Traditionally called Rum Jars, they were used for a variety of purposes. There is an almost endless variety of makers, styles and different fonts, and have been seen in ½, 1 and 2 gallon sizes.

There were many acronyms for "SRD", but it stood for Supply Reserve Depot, which was in Deptford, Kent. The proof of this? An intact jar still with an intact wax seal was located. In the wax was stamped: Supply Reserve Depot. The following list is located in Villers Bretonneux France in the Australian WW1 Museum above the School that the Aussie soldiers help rebuild. The list shows all the wonderfully creative names that the SRD was credited with over time. Towards the bottom you will notice one record highlighted in red. (Click on image for larger version) 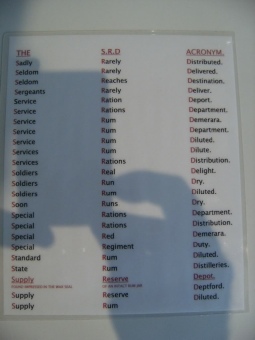 Addtionally, below is a scan of post WW1 military surplus sales brochures for "Earthernware Jars, lying at Supply Reserve Depot, Deptford." Second ad from the botton on the right. (Click image for larger version).

So why has this not been well known until recently? Mostly because it's just an obscure little piece of relatively unimportant information that has been lost over time and recently rediscovered. The anecdotal meanings of SRD have become folklore/fact - particularly when erroneously backed up by the authority of reputable organisations such as the Australian War Memorial. As well, new “discoveries” are being made all the time! Finally though, the mystery of what S.R.D. means can finally be laid to rest. (We wish to thank Graeme and Marc for the info contained in this update). 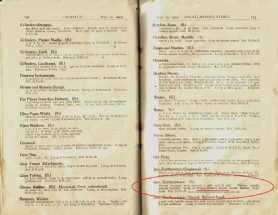 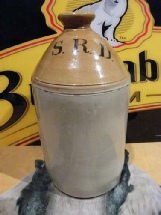