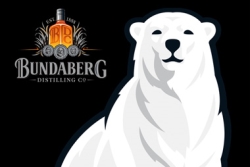 BUNDABERG Rum has its origins in the sugar cane fields of Bundaberg, a subtropical coastal district at 25°S latitude where cane had been grown since 1869 and which is now one of the country’s major sugar areas.

Sugar cane, a giant tropical grass, thrives on the rich volcanic coastal flats. By the process of photosynthesis, solar energy converts water and carbon dioxide from the atmosphere into cellulose of the stalk and the sugar in its cells.

During the processing season from July to November, sugar content reaches its maximum and the cane is harvested by giant machines after burning to remove leaf trash and transported to the mill by its own rail system.

The cane is chopped and shredded into very small pieces and squeezed between heavy rollers at high pressure to express the juice containing sugar. The juice is purified by adding lime and heating, with dirt and other impurities settling as mud in large clarification tanks. The clear juice is evaporated to concentrate it as a thick syrup from which crystalline sugar is then extracted in vacuum crystallising pans. Energy for the whole milling process and for the rum manufacturing process is supplied as steam which is generated in boilers using the sugar cane fibre or “bagasse” as fuel.

Crystal sugar is separated in centrifuges like large spin dryers. The liquid remaining after no more crystals can be extracted is the thick black viscous material called “molasses”. This is the raw material for Bundaberg rum.

Molasses contains about 50% sugar, 25% water, 15% inorganic salts and about 10% other organic matter. Because the sugar mill operates for only five months, molasses must be stored to provide for year round distillery operation. We have three large “wells” which can hold up to 10 million litres of molasses.

The first part of the rum making process is clarification or purifying of the molasses. “Dunder”, the waste material from the distillation process and water are used to dilute molasses which is heated causing unwanted inorganic impurities to settle out as sludge in a clarifier tank. This process is aided by a settling agent called “flocculent”. The sludge is dewatered in a centrifuge and taken away for use as land fill. Clarified molasses which is also pasteurised by the heating to kill bacteria which might affect fermentation is then diluted and cooled before pumping to the fermenters.

The active ingredient in fermentation is yeast which is a living micro-organism. The distillery uses its own pure yeast strain of the species “Saccharomyces Cerevisiae” or literally, “baker’s yeast”. Yeast is propagated daily in the laboratory from a test tube culture and grown under controlled conditions through several stages before transfer to stainless steel vessels in the factory.

Yeast grows by budding and cell division, doubling in number every few hours. It takes about 48 hours to prepare a batch of yeast. From the tiny test tube culture, we obtain several thousand litres of yeast solution to start each fermenter.

Yeast and diluted molasses mix in large fermenter tanks where the reactions take place. Enzymes in the yeast convert sugar from molasses into ethanol (alcohol) and carbon dioxide in almost equal proportions. Starting with a solution containing about 16% sugar, known as “wort”, we obtain the fermented mixture or “wash” containing about 8% alcohol after about thirty hours. Heat is also generated in the process and the fermenting mixture is cooled to maintain its temperature below 40°C. As well as the ethanol, the yeast produces many other compounds known as “co generics” which contribute towards the characteristic flavour of rum.

The fermented mixture is now pumped to the still house and into the top of one of the tall wash columns. These are special types of continuous distillation columns heated by steam passing up from the bottom, contacting liquid on a series of trays or plates, whereby alcohol vapour is driven from the top of the column at a strength of about 50% alcohol by volume. The liquid coming from the bottom, called “dunder”, contains all the solid or non-volatile constituents of the wash. It is partly recycled to the clarification process and partly used as a fertiliser on the cane fields where it replaces potash which would otherwise be an expensive purchase. The condensed liquid, known as “low wines” is diluted with water in the low wine charger tank and fed in batches to post stills.

Pot stills are like large kettles where the liquid is heated by steam coils. Vapour rises up through the still to be condensed back to liquid whose temperature, density and composition are continuously monitored by the distiller who oversees the process according to time-honoured tradition, but now with the aid of modern computerised control equipment. Product from the beginning and end of the batch distillation process, known respectively as “fore shots” and “feints” is rejected to waste streams for reprocessing while the “heart cut” becomes raw rum at a strength of about 78% alcohol. Selection of the cut points for the different product streams is critical to the quality and flavour of the final rum.

From the raw rum receiver, the clear water white liquid is transferred to maturing vats where it is gradually converted from raw spirit to smooth Bundaberg Rum. The vats are large vessels made by expert tradesmen called “coopers” from specially selected American white oak, with about six tonnes of timber in each vat of 60,000 litre capacity. There are over three hundred vats housed in brick or blockwork bond stores spread around the site. The bonds keep temperature fluctuations to a minimum and maintain the correct atmospheric conditions for the maturation process to take place over a period of more than two years. During maturation, colour is adjusted by addition of carefully controlled amounts of a special spirit caramel which helps achieve the characteristic mellow glow of Bundy.

When maturing is judged to be complete, every vat is subjected to careful chemical and taste analysis. Sophisticated instruments tell us whether the rum meets tight quality specifications, but the most sensitive instruments available are the smell and taste senses of the tasting panel who give the final say as to whether the product is good enough to bear the name of Bundaberg rum.

There are many factors crucial to the characteristic flavour of Bundaberg rum. These include the climate and soil of the Bundaberg district, which determine the growing conditions and nature of the sugar cane and thus the qualities of the molasses which is the major raw material; the yeast strain and its growing conditions; the fermentation and distillation technology and the skills of the process operators; the timber and construction of the maturing vats and the atmospheric conditions of the bond stores.

Rum manufacture is a remarkably self-contained process. The raw material, molasses comes from a renewable agricultural product, sugar cane, forming part of a continuous carbon cycle so that it is benign to the atmosphere. All waste streams are returned to the land either as small amounts of fill, as water for irrigation or as fertiliser for the sugar cane, thus completing another closed cycle.

Before bottling, rum is diluted or broken down with very pure demineralised water in large stainless steel tanks where is marries for over a week. Rum is pumped through a fine-pored filter to the bottling plant filler where it goes sparkling clear into new rinsed bottles. These are then capped, labelled and packed into cartons before stacking onto pallets for storage and shipment to customers. 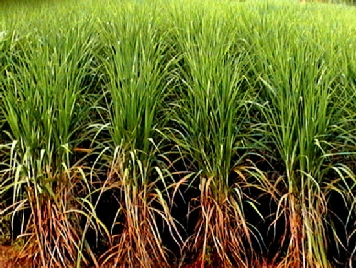 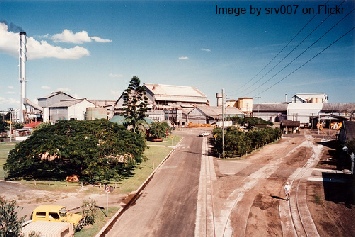 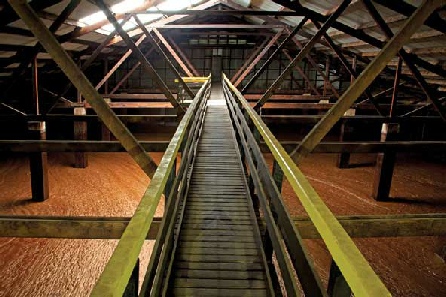 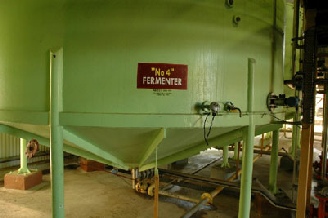 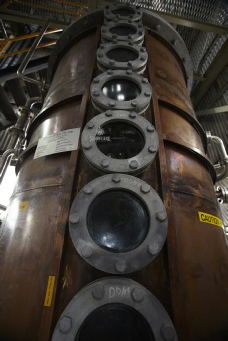 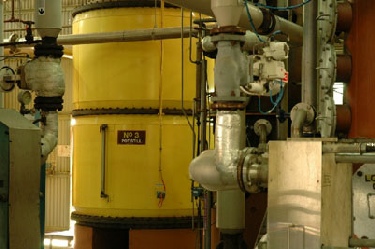 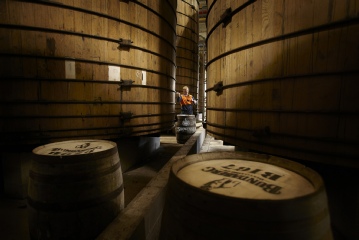 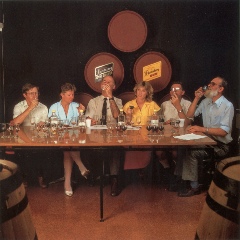 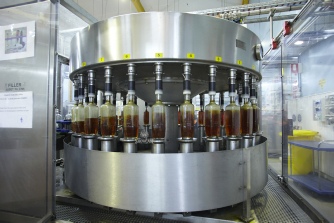 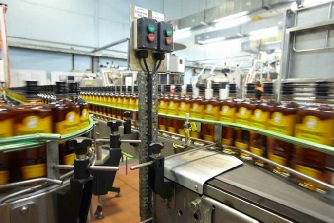