Details: Distiller’s No.3 rum is a triple filtered blend of the finest Bundaberg Rum.  It has a very clean, smooth and silky finish.  More of a golden colour to the traditional UP and OP rum, Distiller’s No. 3 was released in September 2004 and was discontinued in 2009.  The triple filtration plant was dismantled to make way for the new Bundaberg Red filtration process.  Bundaberg Five is also filtered in the same Bond shed as Bundaberg Red, however via a different process.

UPDATE: In time for the 125th Anniversary of BDC, Distillers Number 3 will be re-released leading up to the anniversary on 22 November 2013. 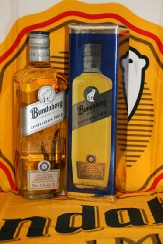