Details: The 1888-1988 Bundaberg Centenary Rum was selected and matured to celebrate 100 years of Bundaberg Rum. This rum is a five year aged rum from Vat 100 - the same vat that produced the famous 1985 Bundaberg Black. The decanter bottles were sourced from Italy and then transported to France, where the gold logo was applied. Finally it made it’s way to Australia where they were filled by John Cawsey and Co Pty Ltd. The timber centenary box was manufactured in the United States.

When it was all complete the components were then bought together and presented as the unique Bundy Centenary Decanter, with a printed cardboard liner, bottle tag and a plastic tipped glass stopper. Approximately 50,000 bottles were released.

Unfortunatley the Centenary decanter was plagued with problems. For a start the timber boxes had dramas with the laminating, with some boxes coming apart. The biggest issue though was with the product recall that was required. A small number of people reported finding small particles of glass in the decanters resulting in a product recall on the 14th August, 1989. This came about by a fault with the bottle supplier. BDC management had concerns prior to the gold emblem being applied. Their thoughts were that once it was on the bottle, they would be unable to wash the bottles prior to filling with rum (the washing process would damage the gold). The suppliers gave many assurances that all would be fine and it would be taken care of before it came to the emblem being applied. Unfortunately, their promises were clearly not lived up to with a small number of bottles being reported to contain glass in the liquid. This led to a total recall of the product. Interestingly only roughly 10% of sold bottles came back. The replacement bottles were filled by hand at the distillery.

In the end, the recall saw the Centenary become a financial disaster for the company. Once the recall was in effect, we are told by ex-staff that were there at the time, that sales of the decanter fell. It is an interesting backstory to perhaps one of the most iconic of the collectable bottles. Perhaps the recall is the reason so many of these bottles are still around, sealed and intact.

There has also been a story around that the short-neck bottles are the original bottles with the long-neck bottles being the ones that were safe and had been the ones given out to replace the recalled bottles. This story we have now discovered, may in fact not be correct. BDC and managers from the time have no recollection or records of this being fact. It is also possible that given the small number of decanters that were returned, that it is in fact the rarer short-neck bottle that was the replacement bottle. Unfortunately there is no way to be certain at this time, and investigation is still being done. If you choose to drink a centenary, we suggest inspecting it quite carefully prior to consumption.

Variations:  There are 2 variations of this decanter, a long neck and a short neck. Each bottle had it’s own cardboard insert for a tight fit around the top of the bottle.  (Some combinations saw short neck bottles be paired with inserts for the taller bottles). The long neck version of the decanter finishes approximately 10mm above the double horizontal lines under the bear on the cardboard insert.  While the short neck version finishes below the word Vat 100 making it approximately 25mm shorter.

Blue, red, green or yellow dots maybe found on the base of the decanters and on the back of the wooden boxes, these dots indicated the batch/day codes of filling.

NB: The recall is now out of date and no bottles should be returned to BDC for refilling. 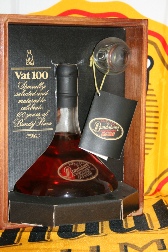