Details:  Bundaberg OP Rum has been around as for as long as it's Underproof brother.  It is based on the same spirit, and blended to the higher strength by adding less pure water in the marrying tanks than UP Rum.

What is the meaning of "Overproof" or OP?  The term originated in the UK in the 18th century when British sailors payment included rations of rum.  The term means the

dilution point of a spirit that would sustain the ignition of gunpowder.  The sailors wanted to “prove” that their spirit had not been watered down.  Gunpowder was doused with the rum and if it ignited, it was over proof.  If it did not ignite to much water had been added to the rum and it was considered “under proof”.  57.15% Alc/Vol was found to be the lowest point at which the gunpowder ignited and was defined as “100 Degrees Proof”.

Bundaberg Rum OP is blended to 57.7% Alc/Vol. The stronger blend brings out more of the rich, intense character that is the signature of all Bundaberg Rum products. 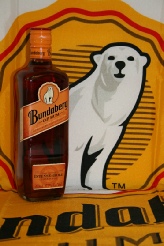